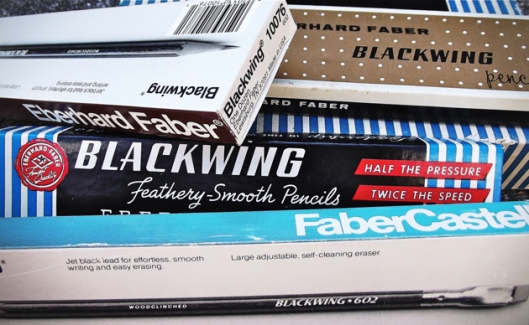 While the basic look and design of the Blackwing 602 pencil has remained nominally consistent—the dark blue-grey color, the oversized ferrule, etc.—it’s a rather different story for the style and design of the Blackwing’s packaging. It isn’t difficult to imagine why there is so much disparity—marketing teams evaluate the cost and effectiveness of advertising, which in turn have a profound effect on design elements and materials.

I’m certainly not the first person to appreciate the design sensibilities of the 1940s, 50s, and 60s, or to have noticed how the design of pencil packaging has declined over the decades. When there were more pencil companies, and by extension greater competition, packaging design was perhaps given more intense consideration in an effort to attract and retain consumers. I think this might have been especially true in an age when pencils were more appreciated, and relatively more expensive for those who used them personally and professionally on a daily basis. The skill and effort put forth by artists prior to the desktop publishing revolution was manifestly noticeable in their work, which imbued a deeper sense of thought and consideration. I don’t mean to intimate that modern, computer-based design is of lower quality, I mean that just about everyone can see something and viscerally know ‘that would be hard to draw’, whereas fewer people might know the inherent difficulty in designing the same by computer; it’s a different sense of appreciation.

I certainly don’t want to come across as denigrating modern design—some of the most memorable designs have come from products of the last few decades. Instead, I’m just mournful for the loss of colorful and artful packaging vis-à-vis woodcase pencils, notably, the Blackwing 602.

My guess is that this box is from the 1940s – 50s. One of its most notable characteristics is the logo: the typeface matches the 1933 trademark application but hasn’t yet become the oblique lettering normally associated with the Blackwing.

The lid is hinged with a single piece of tape, which makes me wonder if that process was in some way automated or done by hand. The remaining graphic devices—a boat, waterline, and the sun—are a curiosity. My first impression is that they are akin to clip art, and don’t have much to do with the product. It’s true that you can get a sense of speed and smoothness while considering a sailboat, but they don’t necessarily connect to the indication of “feathery-smooth pencils”, nor the motto “write with half the pressure, twice the speed.”

Last, looking at the kerning of the logo, especially on the inside of the box, “Black Wing” seems to be two separate words:

Of the packaging I’ve seen, this next example is my favorite.

The box for one dozen pencils has a separable cover, which is festooned with blue/white stripes and features the bold Blackwing logo in white within a black field. The moniker “Feathery-Smooth Pencils” has remained though the motto “HALF THE PRESSURE, TWICE THE SPEED” has been shortened and rendered all in capital letters.

The combination of blue, white, black, and red (as well as the poor registration in some places) takes me back to the comics from Bazooka gum: 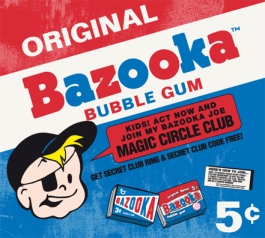 Running along the bottom is a fantastic drawing of the pencil with a bright red eraser, and on the side is the catalog number, “602”, and the quantity indication: 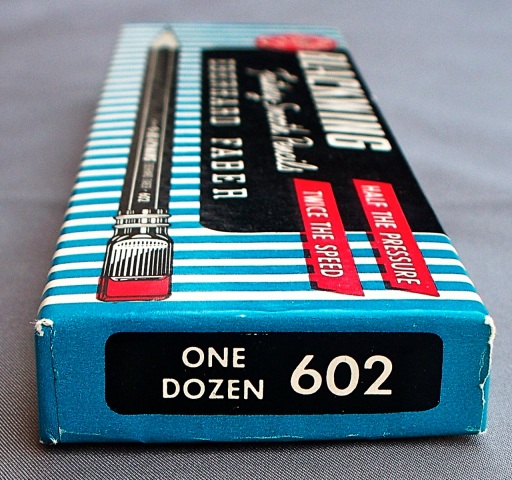 Both this box and the previous box hold Blackwing pencils that are a bit shorter than most other pencils. I presume this is to accommodate the length of the ferrule. 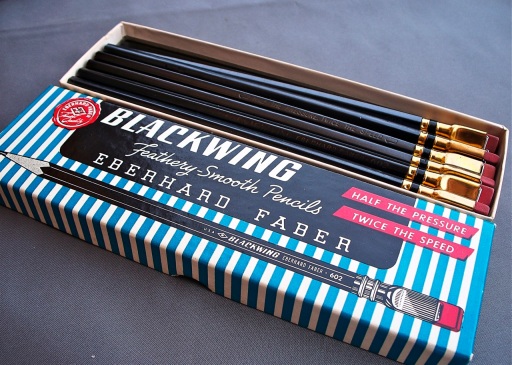 I’ve grown fond of this length, as a newly sharpened “modern” Blackwing feels a little top-heavy until a bit has been sharpened away. 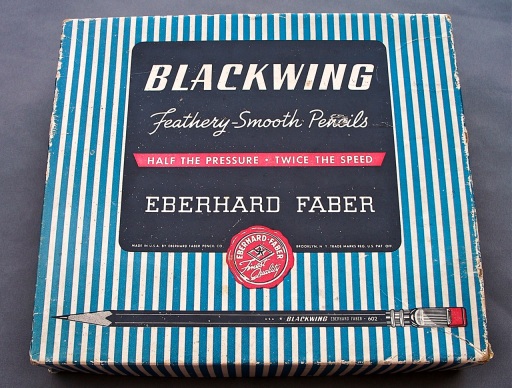 The box for 1/2 gross is unsurprisingly similar: blue/white stripes, Eberhard Faber logo, motto, and Blackwing logo. This is the kind of box, while not necessarily a ‘work of art’ that I would like to display, is nonetheless something you wouldn’t mind seeing on a desk or stacked somewhere in an office or classroom. I can’t say the same for a carton of copy paper. Here is a restored version of the top, but without the pencil: 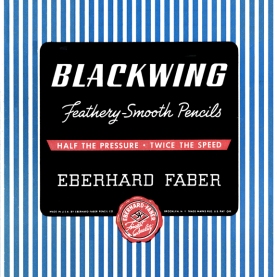 The sides are also replete with the same graphic devices found on the top of the box. 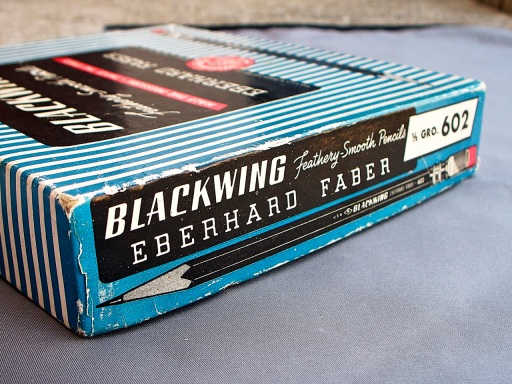 The following boxes are more contemporary, and as you can see, they have all but lost the design flare of the previous example:

The company changed hands several times, with concomitant changes in design teams as well. This box is more like a tube, which better accommodates the shape of the Blackwing pencil. But the logo has disappeared from the front, now relegated to the flap, perhaps to make it easier to identify when they are stacked. 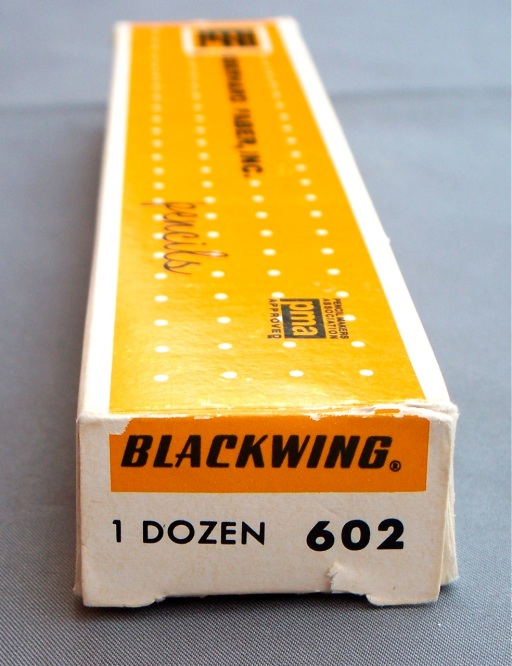 This design, though not necessarily the shape, was used for many contemporaneous pencils offered by Eberhard Faber, as was this design:

The dot-motif is the same but the form factor is more rectangular.

The following design is the last version of Blackwing packaging before the pencils were discontinued:

The starkness of the sans-serif typography is complimented (or, supplemented?) by the halftone photo of the pencil itself. This layout was used for several Eberhard Faber products.

It’s worth noting that this design is inherited from Faber-Castell’s boxes during their relatively brief tenure manufacturing the Blackwing 602.

The only thing that was different about the box (apart from the color) was that instead of “Eberhard Faber” it read “Faber Castell”. 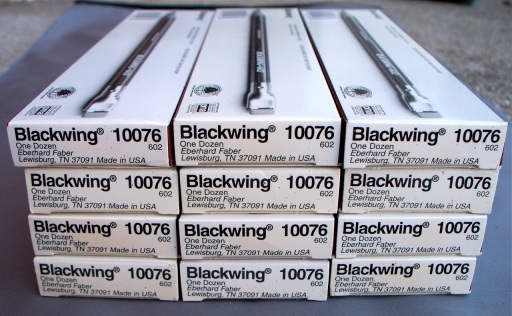 Packaging can be an element that can accompany the pencil in such a way that it ultimately comes to be a part of the experience associated with using a particular brand. If that’s the case, some extra thought and care—even in the midst of computer-based design—could herald a return to the ‘glory days’ when someone might think twice before tossing the box into the garbage.