The 520-page book “Faber-Castell Since 1761″ has officially been released. So far I’ve seen it only through European booksellers, and its availability in the U.S. might be limited since it is written in German. 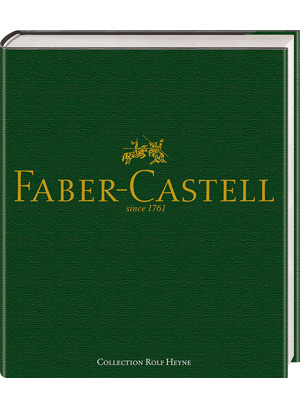 This link is an English translation of the publisher’s page (Collection Rolf Heyne) for the book, and European Amazon sites allow you to see a bit more of the contents. And here is a PDF announcing the book. There are a few booksellers on Amazon.de that will ship to the U.S. for as little as 5 Euros, which is a pretty good deal owing to the weight of the book.

This book has been in the making for some time; I first learned of it around 2009 or so and have been looking forward to it ever since. Initially it was scheduled to be released for Faber-Castell’s 250th anniversary in 2011, but was held back and expanded to include coverage of the worldwide events that marked the anniversary.

It is interesting to see that the Blackwing is mentioned specifically in the table of contents, in the chapters devoted to the brothers Johann and Eberhard Faber. But regardless of the Blackwing 602 this book, with nearly 600 images, will be of interest to anyone who wants to learn more about the history of pencils. It’s worth noting that much smaller books of this sort have been published throughout the decades, going back to the 19th century, but they were often published for friends and trade partners rather than being made available to the general public. As a result, they are exceedingly rare and difficult to find (much less buy). Since a book like this doesn’t come around very often—in fact it may be unprecedented—it may be better to pick one up sooner rather than later.