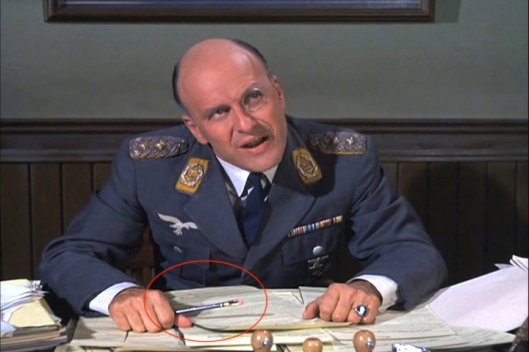 It seems Hogan wasn’t the only colonel at Stalag 13 who used Eberhard Faber Blackwing pencils.

And it looks like there were at least four more ready to go in his pencil pot: 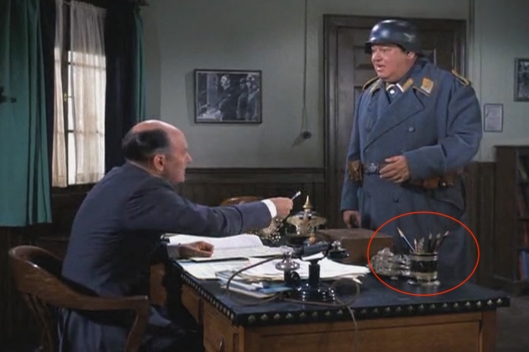 Given that they were around on set, I suppose now the hunt is on to see how many cast members can be found holding a Blackwing.

Thanks again to reader Dan for the tip!

There are two reasons why I can’t help thinking of a rocket shooting past a star when I look at this photo. First, the obvious: the pencil and clamp ferrule kind of look like a rocket, and the flash (or reflected lamp) looks like a bright star.

The other reason? Because this Blackwing belongs to composer Laurie Spiegel, whose piece Harmonices Mundi (The Harmony of the World) is, at this very moment, on two Golden Records speeding toward interstellar space aboard Voyager I and Voyager II.

It might just be me, but there is something about this photograph that is unimaginably hopeful.

Thanks to Laurie for sharing this photo, and for all the other gifts she’s given us.

Vocalist and composer Jon Hendricks passed away yesterday, aged ninety-six. This photo, from the obituary published by the Washington Post, shows Hendricks on the right along with vocalists Dave Lambert and Annie Ross: 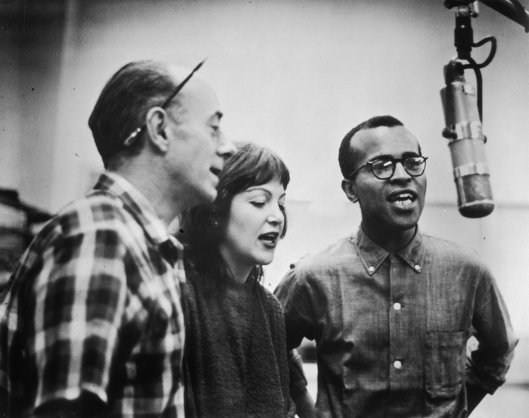 Tucked behind Lambert’s ear is what appears to be an Eberhard Faber Blackwing pencil. The recording session is attributed to the late 1950s.

Thanks to Michael from Orange Crate Art, who I think has spotted more Blackwings than anybody.

Say what you will about Bob Crane, just don’t forget to mention he was seen using an Eberhard Faber Blackwing.

Since the Blackwing first appeared in 1934, I suppose it’s technically possible one could have found its way to a prisoner-of-war camp in World War II Germany (the Eberhard Faber factory in Germany, however, did not manufacture the Blackwing 602). But I’m not so certain that the creators of Hogan’s Heroes were all that concerned with historical accuracy.

The mid- to late-1960s, when this series was televised, was a significant era for the 602. The first and only national advertising campaign for the Blackwing, designed and implemented in 1965 by Julia Faber (the widow of Eberhard Faber III), appeared in several magazines including The New Yorker.

And since Hollywood was no stranger to the Eberhard Faber Blackwing, there are likely additional cameos waiting to be found in the TV shows and movies of the ’60s and ’70s.

Thanks to reader Dan for the tip!

If the mind sees what it wants to see, it’s never so true as when you think you might have spotted someone using a Blackwing. The glint of a long gold ferrule; the brightly stamped graphite-grey barrel. But too often you see it only in profile and you can’t be quite certain. Take for example, this scene from Blade Runner.

Context plays an important role, e.g. a Blackwing appearing in a movie such as All The President’s Men makes perfect sense, but Blade Runner? Well, let us not forget their appearance in another film that was set in a dystopian future: Soylent Green.

So, what do you think? Is Holden holding an Eberhard Faber Blackwing, or is it just another part of the Voight-Kampff Test?

Juliana Hall (b. 1958) is an American art-song composer. Here, she can be seen composing at the piano with an Eberhard Faber Blackwing 602*. Along with animators, musicians were some of the most ardent exponents of the Faber Blackwing.

*Unless it happens to be a Microtomic.

Thanks to Elaine and Michael for the find!