Extenders are a handy way of getting down to the last inch of an Eberhard Faber Blackwing 602. But depending on the design, they can make sharpening the pencil a bit tedious. The Tsunago sharpener allows you to mate pencils stubs, which is nearly like getting a brand new pencil altogether.

The sharpener has three holes: one bores-out the center, one whittles-down the point, and the last cleans the edges:

Step One: Remove the clamp ferrule and trim the pencil at its full diameter. Put that end into the sharpener:

It creates a hollowed-out center, but it may take a little practice getting it aligned properly.

Step Two: Place the point of the other stub into the second hole of the sharpener. It will be whittled-down to match the diameter of the hollowed center:

The manufacturer recommends adding some wood glue, which isn’t a bad idea. But the ends are rather snug even without it: 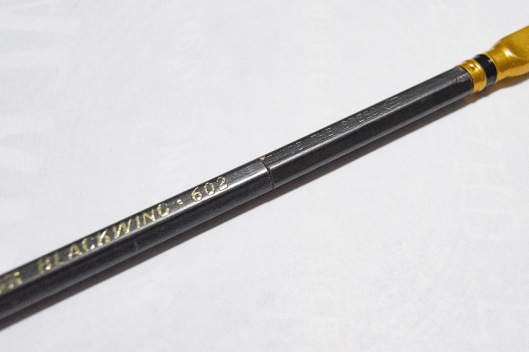 You’re not limited by having to use two ends of the same kind of pencil. For example you could make a Van Dykewing, or even a Microtomiwing if you’d like, so long as the diameters of the two stubs (or however many as you’d like) are similar.