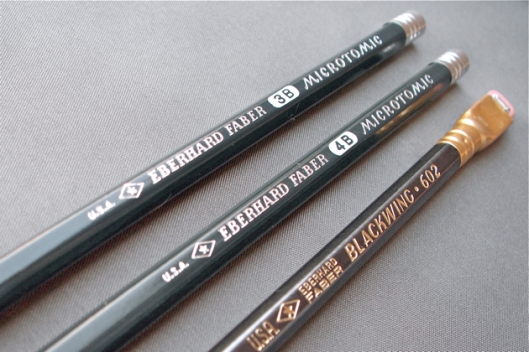 A popular topic for discussion among Blackwing fans—especially for those whose precious reserve has all but evaporated—is whether some other pencil could equal the Blackwing 602. Before making comparisons from without, I wanted to explore an oft-repeated statement, that the Blackwing core lived on in the Microtomic 603, especially the 4B. Is this statement true to a chemical certainty? I have no idea. It took quite some time to acquire the samples I needed—both a 4B and a 3B—and the results were stunningly close. 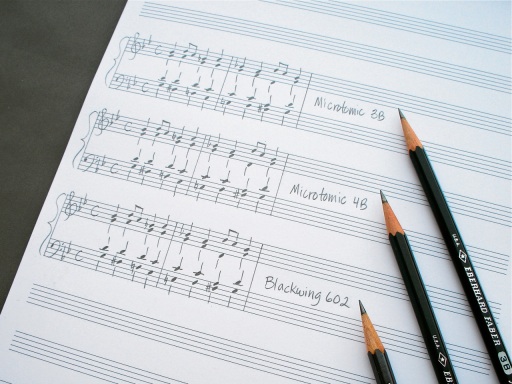 I’m not a big believer in publishing writing samples as a definitive means to otherwise “prove” something about pencils; there are too many mitigating variables. But I’m posting a picture for the sake of illustrating what I did.

It’s hard to tell by this picture, but it’s equally as difficult to see much of a difference in person. There are only very slight differences in these three pencils. It’s too hard for me to say whether the 3B or the 4B is closer in terms of degree, only because the slightest change in hand pressure could create a significant change. I think under “normal” writing circumstances, the 4B would be the closer of the two, but just barely.

The Tactile
I wish it were possible to truly put together a blind test (perhaps I will one day using pencil extenders), but being as objective as possible the first thing I noticed was how things sounded. Yes, you read correctly, how things sounded. There’s a reason for this: as a musician, it’s not unusual to notice subtle differences in timbre, especially when those differences (in a musical context) can bring with them profound changes in interpretation. Now, let me state very clearly that listening to pencils is not part of my evaluation process—personal or professional—in any way. (In fact, I hope that’s true of just about everyone.) I’m mentioning it because something very noticeable occurred. The degree to which the Microtomic pencils were at all scratchy seemed more pronounced than with the Blackwing. But there’s an explanation for this: the Microtomics are essentially one piece with a small metal cap whereas the Blackwing has a pronounced ferrule and eraser, which would dampen vibration throughout the pencil. This prompted me to start again and focus completely on how things felt, since my ears were sending me competing information.

Oh yeah. They stopped making those, too. 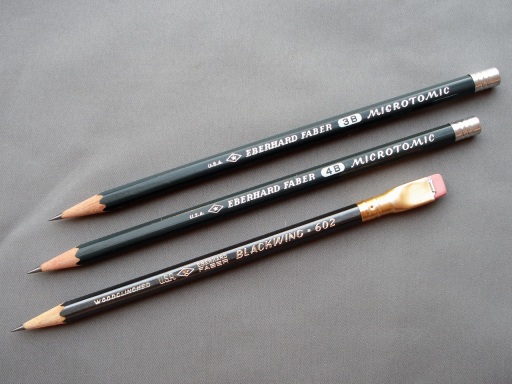 Update 7/18/11: Apparently, how a pencil sounds was important enough to Eberhard Faber that it was part of a 1940s ad campaign. Note how the young lady has some paper wrapped around the pencil in order to amplify the sound (and that you can get a “sound tester” for free!). 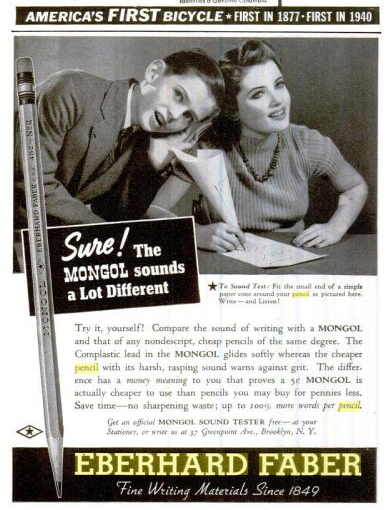 22 thoughts on “A Blackwing By Any Other Name”