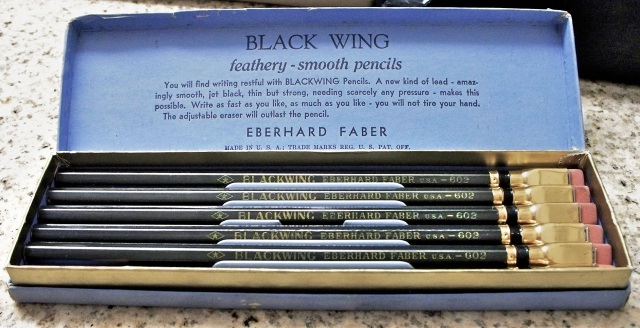 When a pencil—such as the Blackwing—enjoys a decades-old lifespan, I wonder about the consistency of its manufacture. Are the formulas for the leads written on the back of envelopes and napkins, then spirited away to the company vaults never to be updated? In other words, once the approved and definitive formula goes into production, is the book closed on that particular model? Perhaps when a change is made, by default it becomes part of the formula for the “next” pencil.

Given the Teutonic heritage of A.W. Faber, I’d wager that order and consistency were the touchstones of production. This would preclude “adding a pinch of wax” to the batch every now and then just to see how that run would turn out. But, if we could take for granted that lead formulations—and their extrapolation into large production runs—were exacting, wouldn’t it be reasonable to presume that pencils made at different factories might have palpable differences due to slight variations in measurement?

With today’s high technology it hardly seems plausible, for the same reason why every Pizza Hut pizza tastes the same no matter where you eat one.

But what about age? No matter how fine the wine, it will one day eventually become vinegar, so-to-speak. Do pencils suffer an analogous fate? If so it’s probably only noticed among the softer leads; I can’t imagine a 6H lead becoming much darker with age. But I can’t help noticing the difference between the older Blackwing pencils and the newer ones: they are consistently darker the older they are. Presuming the pencils remain dry, does the pressure over time contribute to this darkening, or is it that the formulas were just different? I’ve noticed an even more dramatic difference between a current Staedtler 2B and one made in the 1950s.

If it’s true that their chemical makeup changes over time then I guess that’s good news: only a few more million years under several metric tons of pressure and I’ll be the proud owner of Blackwing diamonds.